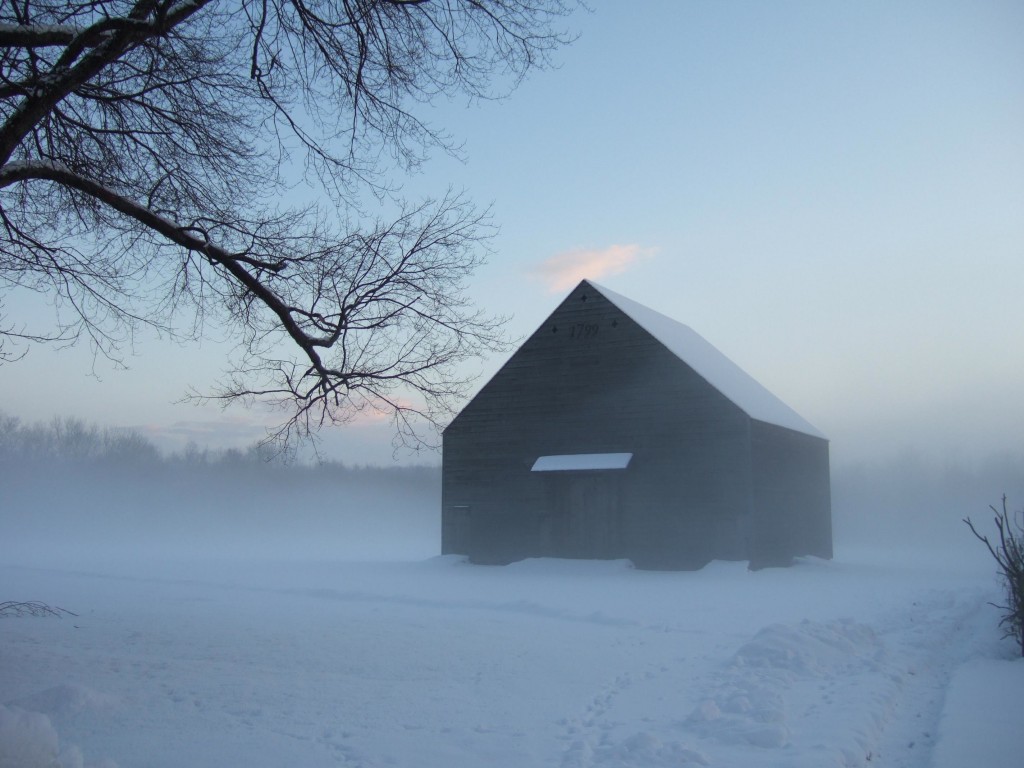 My first brush with a Dutch barn came when my wife and I rented an old stone house in Ulster County. The barn behind it, like all barns, was picturesque, but a barn’s a barn, right? That’s what I thought until a passing stranger explained to me what a unique example of medieval architecture I had sitting in my backyard. “When the Dutch settled this land, back when New York was New Netherland, barns like this were everywhere,” the man said. “Now very few of them are left.” Overnight I became a confirmed barn geek. 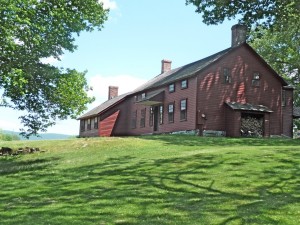 Nice house but where’s the barn?

The little red farmhouse in Ancramdale we bought a couple years later had everything you’d want in a 200-yearold eyebrow colonial. Everything except a barn that is. That’s when the insane idea to move an old barn to the property began to take hold of me. This proved to be a difficult concept for my wife to accept. But two years and many visits to the couples therapist later it was agreed that I could have my barn (in return I gave up the right to anything for the rest of my life). Now I just had to find one.

The geographical spread of the Dutch barn, not surprisingly, follows the settlement patternof the Dutch. Up the Hudson, through the Schoharie Valley, and west along the Mohawk River. It was along this last stretch that my search began. I spent a year travelling the back roads, knocking on doors, following leads picked up at diners and feed stores, poking around in dozens of barns, some small, some large, some in great condition, some barely standing. 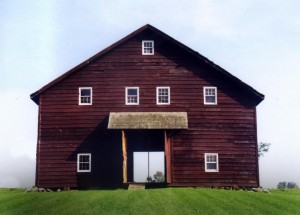 Before: The barn in Fort Plain.

Not all were for sale but many of them were; it takes a lot to maintain an old barn and, except for in the Amish communities, most of the farms are either abandoned or just barely getting by. I saw a lot of nice barns but none so nice as a spectacular specimen in Fort Plain owned by a woman named Eva. It too was for sale but was so far outside my price range I had to put all thought of owning it out of my mind. It was clear the woman wasn’t going to lower the price–she didn’t have to, she had lots of people interested in it, people who wanted to turn it into a house and were willing to pay a lot for the privilege. Unless I won the lottery there was no way I was going to come up with that kind of money. Still, whenever I was in the valley, which was pretty much every weekend, I never failed to visit the barn, to stand in it, pay homage to it, to admire its magnificent structure–the beams over the threshing floor were a staggering 12 by 25 inches wide–and to think to myself “if only.” Eva didn’t begrudge me my weekly pilgrimages, in fact she seemed to enjoy watching the little courtship that had developed between me and her barn. She knew I couldn’t afford it though, we both did. So I kept looking.

Eventually I found something, a lovely little barn just across the river, but just as I was preparing to make an offer on it something completely unexpected happened. Eva, who was in the midst of her own negotiations with a couple who wanted to convert the barn into an enormous great room, called to ask if I was still interested in it. Well, yeah. 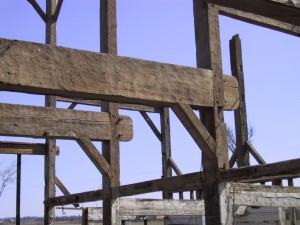 The barn comes down.

Make your best offer then, she said. I did, knowing for a fact it was half what the couple had offered. It was clear from her reaction that I didn’t have a prayer. Still, I don’t know if it was because she was really considering it or because she was just letting me down easy, but she asked me to hold off buying the other barn for a day or two. Jeez, thanks a lot, Eva, thanks for ruining my weekend, thanks for needlessly torturing me just when I’d made peace with my decision. Of course “a day or two” turned into two or three and I was bouncing off the walls by the time I got the email from Eva. The email that said the barn was mine. What? I had to reread the thing several times to make sure it wasn’t a typo. From the moment I’d met her it was clear that Eva was nothing if not a hard-headed businesswoman. Why would she accept such an offer? Because she knew I loved her barn and would see that it remained exactly that, a barn. Needless to say I didn’t wait around for a better explanation, I got my butt to Fort Plain as fast as my Subaru would carry me.

And so an Amish crew was hired and disassembly began. The massive beams, now numbered and carefully catalogued, were loaded onto a flatbed truck and driven the eighty miles to Ancramdale. From there a yearlong restoration was gotten underway. 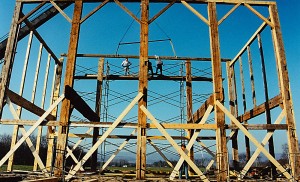 The barn goes up.

Much had changed in the barn’s 200-year history. Entrances had been added, beams had been cut to make way for windows and hay tracks, others had been undermined by moisture and rot and would have to be replaced. Mysteriously, the sidewalls had been raised several feet and the rafters shortened, reducing the pitch of the roof. (There are many theories about why this was done–it would have been an enormous undertaking–but the most plausible is that long ago the barn was hit by a violent storm, a storm so violent the roof was blown off and the rafters shattered where they met at the peak. In order to salvage them they would have had to been shortened and the sidewalls raised, which would have had a flattening effect on the roof line.) So one of the most difficult and time consuming parts of the renovation was lowering the sidewalls and restoring the rafters to their original length. It was worth the trouble though for we knew that when re-errected, the barn would have the same dramatic roof pitch it would have had when it first went up in 1799. (Note: the exact age of the barn was determined through a process known as dendrochronology.)

On a cold November morning in 2001, six strong men armed with long ropes and heavy wooden mallets (used to hammer home the hardwood pegs that held the frame together) gathered for a barn raising. 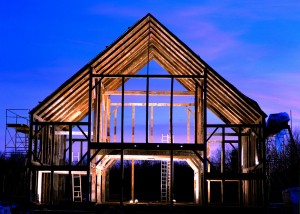 It took another eight months to finish the roof and siding and to hang the massive doors. In late summer the barn hosted its first wedding. (At this rate I’m thinking the barn will pay for itself in about 300 years.) It’s safe to say the barn hasn’t looked so good or stood so proud in more than 200 years.

The Circa 1799 Barn has hosted fundraisers, square dances, rock bands and chamber orchestras. It’s been the site of speeches and scholarly talks, poetry readings and guided tours. It’s been graced by a congressman and a governor (who suddenly became a former governor) . But to me the barn’s most honored guests were the men who built it and the generations who labored within its walls. You can still see the names of some of them written across the beams. If you stand in there on a quiet afternoon you can almost hear them unloading the wagons, feeding and watering the cows and horses, maybe even debating the merits of their new president, Thomas Jefferson. To stand within the Circa 1799 Barn is to stand within the sweep of history.

Every barn is a monument of sorts to the anonymous souls who have toiled within it. Some just happen to be more monumental than others.

After: The barn in its new home in Ancramdale.